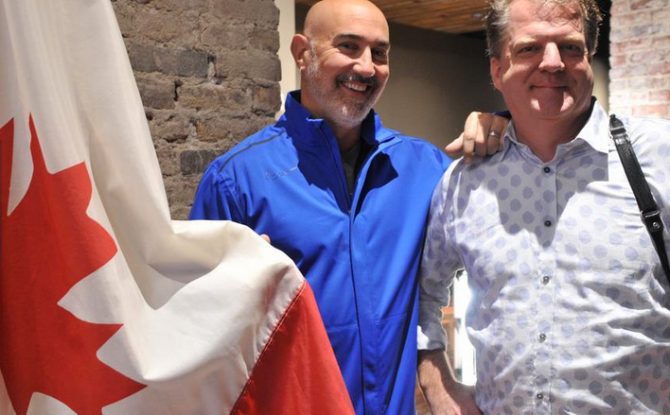 Oh, Canada! Kooky Canuck is ready to reopen in Downtown Memphis after a slight move.

“Essentially, it is the same great, fantastic food that people are used to, and it is a whole new beginning,” said Shawn Danko, president of Kooky Canuck.

It was revealed in August that Kooky Canuck would relocate, and a regional Mexican chain, Las Margaritas, would take its old spot.

Now, one day away from wrapping up a 17-day remodel on Kooky Canuck’s new 87 S. Second St. home, Danko said they were actually able to do more with less. The restaurant is 4,000 square feet, which is 1,000 square feet shy of what they previously had, but Graham Reese of Graham Reese Design Group was able to capitalize on the footprint.

“What we tried to do was reincorporate some of the icon items that [Danko] already had, [such as] the logs from the wall,” Reese said. “The other thing we were really doing is breaking down the space so that it has various layers.”

The restaurant has a seating capacity for 140 people, with seating available at the bar, booths or tables located in a side room that can accommodate large groups. The layout breaks the space into three different dining experiences.

“It is a woodsy look, but it also has this industrial feel with steel plates … so it is a mix of what Shawn had done in his last restaurant and the evaluation of that; taking a few items from what he did out in Cordova; and then bringing it over here but in a different application,” Reese said.

In addition to an expanded bar, customers can expect to see technology upgrades with 70-inch TVs, opposed to the 32-inch models at the previous location. A 12-tap draft system that will feature a wider selection of local beers was also added.